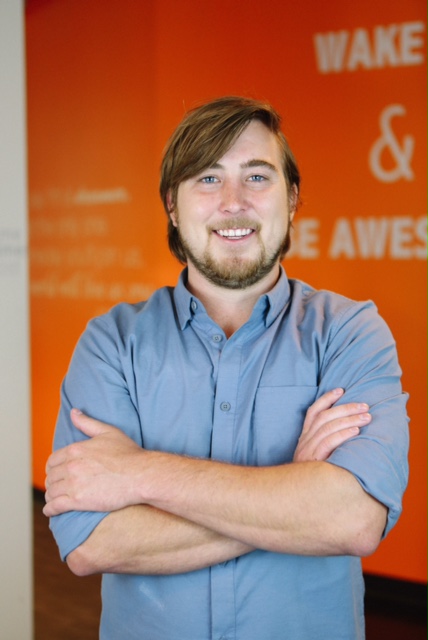 AJ Forsythe is the confounder and CEO of iCracked, an on-demand smartphone repair network that has thousands of technicians servicing customers in the US, Canada and Japan. It all started while AJ was a psychology major at Cal Poly in 2010. He kept breaking his phone and was tired of paying $200 to Apple, so he took it apart and replaced the screen himself.

Luckily, his friends made the same poor lifestyle choices, and they needed repairs as well, so he started fixing iPhones for his friends. Forsythe went to a career fair as a senior to hand out resumes for (likely boring and unpaid) summer jobs when a friend (now CEO of the packaging empire Arka), Phil Akhzar, came up to him with a broken phone in need of assistance. Forsythe threw the resumes in the trash and went to Kennedy Library and started the business that evening.

Forsythe’s best friend Leslee Lambert was an award-winning graphic designer at Cal Poly, and she helped create the first logo, website and designs. Forsythe paid Lambert in $2 bills because that’s all he had. His parents we’re not excited about him wanting to take a fifth year as a “super senior,” but he was soon making enough money to pay his tuition and cover the tab at SLO Brew for friends. (He has offered to cover the tab next time he is in town).

During his senior year, Forsythe teamed up with a friend, all-star UC Santa Barbara pitcher Anthony Martin, and they started expanding, turning the lifestyle business into a semi-legitmate company. The idea was basically to create a nationwide Geek Squad equivalent for customers where anywhere you are in the US, you press a button and they show up and solve your problem. Today, iCracked is a multimillion-dollar company with over 70 employees and a network of a few thousand iTechs covering 93% of the US population. Their next challenge is to conquer smart home installation for retail partners where you press a button and they turn your home into a smart home. Stay tuned!

What did you want to be when you were growing up?
A fighter pilot and then transition to becoming an astronaut. I still want to do this.

What is the best advice you didn’t take?
Great question, I’ll never forget this. When it was just Anthony and me, we went to talk to some local seed investors about raising capital. Admittedly, we didn’t know what we were doing, and when we pitched the company over the course of an hour, we got a reaction that was basically like, “Hey, we think your idea is cute and all, but it will never be a big business. You two should just stick to repairing phones yourself and keep it small because it can’t become big.” I thought, "What the heck are they talking about? We can make this thing huge." Our company probably looked like a toy at the time.

Name one thing you learned from psychology that you have applied to your business?
Nearly everything. It was the best major for managing and developing yourself and your team. The conflict resolution class has been ideal for dealing with intracompany issues and getting to the root of all problems vs. the symptoms or surface level issues.

Do you have a motto or personal mantra?
“I’m still gonna send it” – watch it on YouTube…

What do you do on your days off?
I love to hang out with my brother Chip Forsythe, who was a wine and viticulture major at Cal Poly and now runs his own winery called Rebel Coast. We generally make wine, beekeep (we took the beekeeping class at Cal Poly; take it!), lobster dive, spearfish, camp, hike, work on a Jet Pack company I love called JetPack Aviation (again, YouTube it – you won’t be disappointed), plan Burning Man trips, and recently, work on a 130-year-old slab of redwood that I am making a table out of.

If you could have any super power, what would it be?
To be able to teleport places, including to outer space/other planets.

What will be your next adventure?
Professionally, I would love to build a massive beekeeping company powered by software. I also think an alcoholic kombucha company would be cool. Personally, I would love time to go spend a week in Nepal and the Himalayas with my best friend Max McDonald and his company The Adventure Factory.

What advice would you give to a student who is about to graduate?
Do NOT freak out if you don’t have your life or career figured out yet – you’re not supposed to. Stay ambitious and don’t settle for less than your worth or in a company you don’t see yourself growing in. There’s a fantastic Wait But Why article called How to Pick a Career that came out recently. Seriously stop what you’re doing and Google it if you are looking for answers – I promise it’s amazing. Find something that is fulfilling and is a path to doing what you were put on earth to do. Also, don’t be so millennial-ish, it’s annoying to have to deal with, and try not to be entitled. Work in a big company and work in a startup. Prove your value and earn everything (respect, people’s time, etc.). Ask a lot of questions. Read a book a month. Know that careers are long and jobs are short. And always try to get better and grow as a person — Every. Single. Day. The most important, have fun and enjoy life. Also, beer makes you fat; do gin and sodas.

How do you think alumni can be more involved with Cal Poly?
Plan fun events. Put together more local city chapters. Find creative ways to re-start alumni groups and friendships. It would be fun to have annual gatherings or parties in SLO.

If you have any questions for Forsythe, you can email him at aj@icracked.com.